During the 2012 auditions, both females engaged in a conflict. Mariah thinks Nicki cannot sing and therefore, she should not be judging folks.

Mariah is not having it easy to finish her fifteenth studio album. Thanks to the single track “I Don’t,” featuring YG.

Rather than concentrating on that track, Mariah Carey and Co. decided to add no other female rapper than Remy Ma. Remy’s contribution lifted the single, however, Remy Ma’s recent beef with Nicki Minaj has escalated the beef between Maria and Nicki.

In 2012 when Nicki Minaj was taking advantage of her superstar, she happened to be a judge on American Idol with Maria Carey. During the auditions, both females engaged in a conflict that brought about a two-day stop of filming, with Nicki having the loudest whimper in the room and MC² calling the Barbz leader “a three-year-old”.

TMZ revealed an unwarranted claim that Nicki threatened Mariah’s life, saying, “If I had a gun, I would shoot her.” But information disclosed wasn’t precisely fun loving hits, either. TMZ got the recording of the jab and the interpretation:

Mariah: I am not being disrespectful.

Every time you take a shot at me I’ma take it back, and if you gotta f*cking problem then handle it. I told them, I’m not f*cking putting up with your f*cking highness over there … figure it the f*ck out. Figure it out.

Nicki: Figure it out.

Mariah: do I have a 3 year old sitting around me?

Nicki: I’m not sitting here for 20 minutes and having you run down your résumé. Everyday, No! Goodbye!

Mariah: Listen, I can’t see my kids because you decided to make /to have / to have a little baby fit and going all around the stage.

According to sources, Mariah thinks Nicki cannot sing and therefore, she should not be judging folks.

Nicki Minaj said to Mariah Carey: “Clean your ears out!”

All said and done, in 2010, both females recorded a track where Nicki was featuring on Maria’s single “Up Out My Face”. 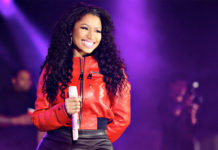 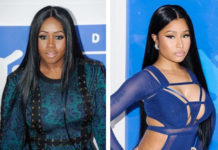