Qasem Soleimani, a prominent Iranian military commander, in a “decisive defensive action to protect US personnel abroad” that was meant to deter “future Iranian attack plans,” according to the Pentagon.

Qasem Soleimani, the head of Iran’s Islamic Revolutionary Guards Corps (IRGC) Quds Force unit as well as Abu Mahdi al-Muhandis, the deputy head of the Iran-backed Iraqi Popular Mobilization Forces (PMF) were part of those who died in the attack , according to a statement from the PMF, which mentioned that the pair “were martyred by an American strike.”

Soleimani was highly respected and adored in Iran. This is evident in the three days that have been declared as a national mourning period. Supreme Leader, Ayatollah Ali Khamenei, took to his official website to vow revenge for the killing, stating that “harsh revenge awaits the criminals” who caused this. Khamenei threatened that the fight would not end now and also said it had been Soleimani’s desire for years to die a martyr. He added that “His pure blood was shed in the hands of the most depraved of human beings. “

In a tweet, the Iran foreign minister Javad Zarif, described the US strike as an “act of international terrorism,” adding that it was an “extremely dangerous and foolish escalation. “The US bears responsibility for all consequences of its rogue adventurism,” he added. 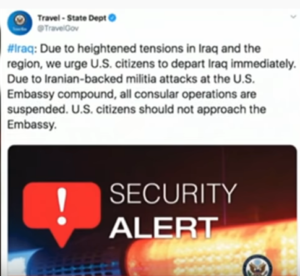 The killing of Soleimani can be related to Trump’s decision to step back from the Iran nuclear deal as it comes just hours after the Pentagon sent a strong word of caution to Iran-backed militias amid concerns that they may find ways to retaliate against the US following their attempt to storm the US embassy in Baghdad. According to the Pentagon, Soleimani was “actively developing plans to attack American diplomats and service members in Iraq and throughout the region, which was a threat to US lives and serves as justification for killing one of Iran’s top-ranking military officials.

The news of Soleimani’s killing generated starkly different reactions along party lines with Republicans heaping praise on Trump and Democrats expressing concerns about the legality and consequences of the strike.

Sen. Ben Sasse, Republican of Nebraska, said in a news release that “General Soleimani is dead because he was an evil bastard who murdered Americans” and “the President made the brave and right call, and Americans should be proud of our service members who got the job done.”

“Tonight, he got what he richly deserved, and all those American soldiers who died by his hand also got what they deserved: justice,” Cotton said. “President Trump is bringing our nation to the brink of an illegal war with Iran without any congressional approval as required under the Constitution of the United States.”

He added: “Such a reckless escalation of hostilities is likely a violation of Congress’ war making authority — as well as our basing agreement with Iraq — putting U.S. forces and citizens in danger and very possibly sinking us into another disastrous war in the Middle East that the American people are not asking for and do not support.”

Biden Shakes Up Diplomacy With Warning To Israel