Muslim militants have for some time now, attacked the Sahel region of Africa leading to the death of many

Burkina Faso, which is a predominantly Muslim country, was quite stable until 2015, when conflict spread from Mali, and has since then been on the receiving end of deadly attacks right from the capital; Ouagadougou to other towns such as Yirgou, Djibo, Silgadji and Dablo.

Recently, there has been a suspected jihadist attack in Arbinda, in the northern Soum province. The attack was carried out by dozens of fighters who were riding motorbikes and lasted for a while. Thirty-five civilians were killed, of which 31 were women. Also, seven soldiers along with eighty militants were also killed as the army tried to fight back. The president; Roch Marc Christian Kabore, in a statement declared two days of national mourning for the departed citizens and also praised the heroic action of the soldiers.

One would think the attacks would be limited to the natives of the country, but this is not so as there have been foreigners who have been victims of the Jihadist invasion in the country. On the 17th of January, a Canadian geologist who was kidnapped from a mine exploration camp was found dead. Again, two French soldiers were killed after being freed from hostage on the 11th of May. The attacks have also affected churches and have led to the loss of life of quite a number of catholic priests and congregants. Mainly though, these attacks are often focused on people who have an affiliation with the state; such as mayors, police officers, village counselors, as well as civil servants suspected to be working with the military.

The Human Rights Watch, in a report, stated that in counter attacks from the military, the Fulani community has been singled out as guilty by association to the militant groups, which in turn leads to increasing militancy from the Fulani youth. The attacks have also led to an economic standstill and westerners who are of high value to businesses have left. Also, more than 1000 schools have been forced to close down as the militants are against secular education. This has affected more than 150,000 children who should otherwise be in school, learning to make something out of themselves for the future.

The foreign minister, Alpha Barry, says the fight against terrorism has become a fight for the very survival of the Sahel region. Burkina Faso serves as the barrier between the Sahel and coastal countries, and if broken down, will serve as a threat to the security of its neighboring countries. In April when one of the jihadist leaders was arrested, it was found out that he had contacts in Togo, Ghana as well as Benin.

Security forces in Burkina Faso have been granted extra power to search homes and restrict movement all in a bid to ensure safety. According to the UN, the already poor country spends more than a fifth of their national budget on defense and security. 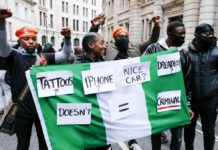